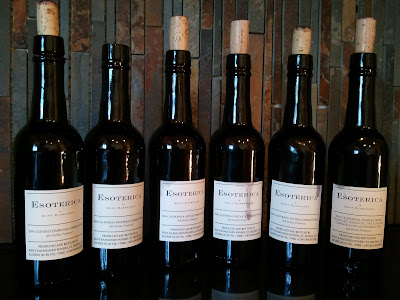 In January 2008 a quest to sample 100 different and pure varietals began.  Almost a year later and with only slight deviations from the 100% rule that quest was completed.  However I soon became aware of The Wine Century Club's "Doppel Member" distinction and the quest was extended to 200.  It took more than a year and a half to get to 200.  Last night that varietal threshold was crossed with an assortment of delicious pure bottlings from the Kent Rasmussen Winery.

A few years back under his Esoterica label Kent decided to make a deconstructed "port" in addition to the final blend.  I was lucky enough to buy one of these rare sets (less than 500 375ml bottles were made).  Included in the six bottle collection was: Tempranillo, Sousao, Tinta Cao, Touriga Nacional, Trousseau, and a final blended bottle of 20% each.  Varietals 198 and 199 the Touriga Nacional and the Sousão were well balanced, sweet without being cloying and thoroughly enjoyable.  Varietal 200 was the Tinta Cão which had more of the tannic backbone.  The blended bottle was excellent and reflected the strength of the Tinta Cao and the softness of the others.  What a treat!

In a few days I will send off my application for inclusion into the Dopple Membership.  Perhaps this will put an end to the quest as I know it.  I have however noticed that there is now a Treble membership.....
Posted by Ted at 8:21 AM No comments:

Magliocco is an old Italian red grape that is commonly used for blending.  This Magno Megonio from Librandi has a lot of acidity and backbone but not a lot of flesh.  Add this wine to a flabby fruit bomb and you could have a big winner.
Posted by Ted at 6:26 PM No comments:

Pale purple and thin on the pour.  Peppery and earthy on the nose.  Tightly wound acidity on the palate.  Dry and slightly astringent on the finish.  This is a Trousseau also known as Bastardo.

I happen to like this wine but then again I tend to like harder wines.  It is quite nice to run into a 12.5% abv red wine these days.  I am a bit exhausted today so I will keep this one brief.  Here's to closing in on big #200!
Posted by Ted at 5:32 PM No comments: 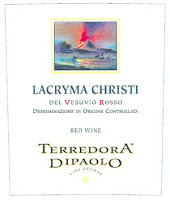 Lacryma Christi, (also Lachryma Christi, literally "tear of Christ"), is the name of a celebrated Neapolitan type of wine produced on the slopes of Mount Vesuvius in Campania, Italy.
The name Lacryma Christi comes from an old myth that Christ, crying over Lucifer's fall from heaven, cried his tears on the land and gave divine inspiration to the vines that grew there. The sides of Vesuvius are deeply scarred by past lava flows, and its lower slopes are extremely fertile, dotted with villages and covered with vineyards.
Piedirosso is the varietal in this very nice wine.  This one is a bit of a u-turn from the night's first wine.  This red is loaded with dry minerality.  I have now had a number of excellent wines coming from this area and using grapes which have been grown on the side of Vesuvius.  Volcanic terroir really does the trick for me and I think that these are some of the most interesting wines in a country with perhaps the greatest variety of wine styles in the world.
Posted by Ted at 8:05 PM No comments: 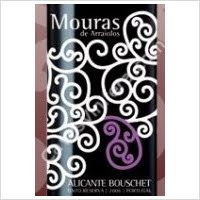 This is a grape that I thought would be one of the first 20 or so that I tried.  In fact I had some not long before I started this quest.  Then an alicante bouschet dry spell set in and we arrive "suddenly" at #194.

Here we have another successful Portuguese effort.  We had friends over and had a feast of BBQ ribs, decadent sides and of course pies and cookies.  My shipment from Laurenti Wines came in and so I thought it would be a great time to try a few wines.  Well this $10 bottle was gone very quickly.  It is a well rounded red with good acidity but light on tannins.  This example isn't something I would want to cellar perhaps but it does a great job at a great price of pleasing a party.
Posted by Ted at 8:00 PM No comments: 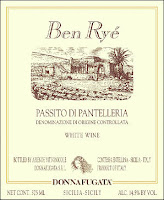 Wine Enthusiast Review
Rated 94
"Ben Rye is a glowing example of Sicilian pride, and you can understand why. Beautifully integrated with deep aromas of orange zest, honey, chestnut, molasses and dried apricot, the wine is a true incarnation of lavish decadence. The mouthfeel delivers impressive intensity and concentration of flavors."

I think by now you realize those aren't my words but I agree whole-heartedly.  In Sicily the Muscat of Alexandria grape is known as Zibibbo.  This sweet white wine pours the color of cognac.  It has a delightful nose of apricots which is followed by a lovely bouquet of sweet dried fruits.  This grape, though hard to find here warrants some additional attention.


Also THIS is one of the coolest google map views of a winery I have found so far!
Posted by Ted at 5:11 AM No comments: 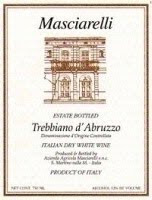 Bombino Bianco is a white Italian wine grape planted primarily along Italy's Adriatic coast line, most notably in Apulia. The vine is prone to high yields and is sometimes known as "Trebbiano d'Abruzzo"


And that is what we have here.  Its a nice clean Italian white with a lingering acidity on the finish.  It is refreshing to find.... well... a refreshing wine here at 192.
Posted by Ted at 7:16 PM No comments: 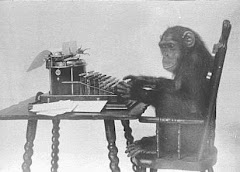